I learned Devin Skelton, a prolific Facebooker and pilot of the "Batmobile", has passed on. I never met Devin although I felt like I knew him through his fun and crazy Facebook posts and our shared passion for three wheels.  I always enjoyed his posts and his excitement at sharing his velomobile adventures with others, especially kids.

Devin was a worthy ambassador for the three wheeled human powered world and will be missed. His passing hits close to home as I understand he passed away from a sudden heart attack while riding at the young age of 55.

This is a silly little post about human nature. Yesterday I stopped to take a break, have a snack and enjoy the view while sitting on a rock next to my trike. I was all alone in a vast parking area. So why is it that within a few minutes a car pulls in the empty parking area and decides that parking right next to me is the best place to park? I think the parking area is big enough to accommodate a little space between those who want to sit quietly and enjoy the ocean view and those who wish to make a noisy spectacle out of their arrival. Oh well...human nature. 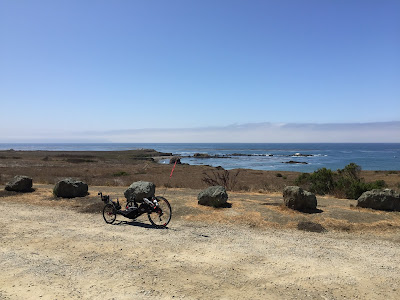 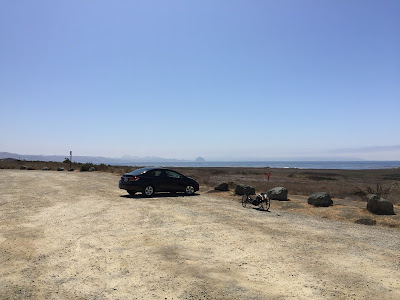 As I sit here drinking my morning tea and nursing sore hips after doing do much lifting and assorted other chores associated with moving to Cambria I'm thankful more then ever for my Catrike 700. Riding my 700 and riding fast is pretty much all I got that keeps me active and physical. It's the only thing that keeps me tolerable for my beautiful wife.

I need to be active or dead. When my time comes to check out, whether it's tomorrow or thirty years from now, those fools who love me know that I have no intention of slowly fading away lying down in a bed. Living a physical life has taken it's toll but it's the way I choose to live regardless. Hip replacements, back repair, shoulder repair, knee repairs and assorted other shit is all forgotten as I ride. As long as I can hit the road on three fast wheels I know I'm still alive. 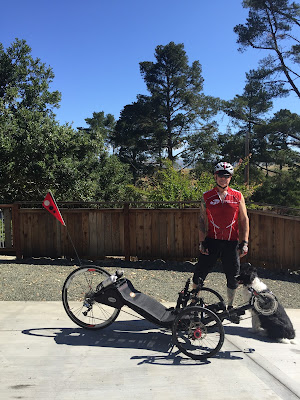 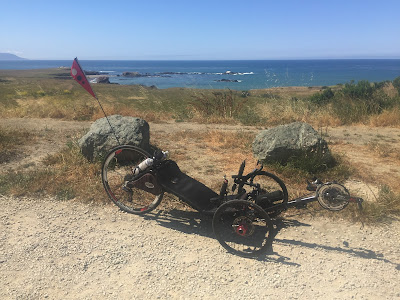 I have to admit, I was spoiled by well maintained roads back in my old town of Agoura Hills. Since I've moved to the Central Coast almost three months I've come to expect road conditions that go from smooth to rough to rotten. Sometimes all on one ride. The beauty of the area makes up for the varied road conditions.  I'm not ready to go suspended (although I've toyed around with the idea). I'm trying to find a balance between speed and comfort on my 700. I've been experimenting with different tire options in an effort to dial in the best ride given the roads that I now ride. 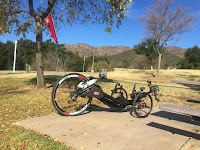 On smooth roads I use my fast wheelset. For a little comfort I'll pump up all three tires to a low 90psi (85psi being the minimum). This set includes a Schwalbe One 28/622 on the rear and Schwalbe One 23/406s on the front. 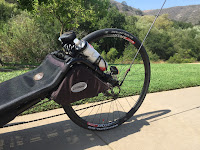 For the rougher roads I use a Kojak 35/622 (with DT Swiss rim and hub) on the rear pumped up to 60psi (55psi is the minimum). Changing out only the rear wheelset makes for an increase in comfort. with minimal effect on speed. BUT sometimes it's not enough for my old bones. I can manage short runs on rough roads but mile after mile of chatter from the front wheels is too much. Even worst is an unexpected abrupt transition from smooth to rough pavement when taking a downhill run at 40mph plus. If your not paying attention the skinny front tires can take on a life of their own and remind you to wake up. And then there's the potential pinch flat with the 23/406's at low pressure when running over road debris which is not uncommon along the roads of the Central Coast. 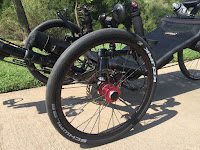 Next, with the Kojak still on the rear I tried adding Kojak 35/402s to the front.  I pump them up to 60psi (recommended pressure is 55 to 95psi). With the Kojaks all around the ride is more comfortable but the loss of speed is apparent and the handling is a bit sluggish.

Bottom line. Whenever I can I'll use the Schwalbe Ones. When I know the going will get a little rough I'll use the Kojak wheel on the rear. Using the Kojaks up front makes for a bit of a dull ride. I''ll leave them at home for now.

Someday I'd like to try out the suspended ICE Sprint X Spec with Schwalbe Ones. I'm interested in seeing what the ride is like when the rotating mass of the wheels is at a minimum and the mechanics of a minimally suspended trike (rather then larger tires) takes the edge off the rough roads.
at August 03, 2016 No comments: