My Thoughts on Suspended Trikes 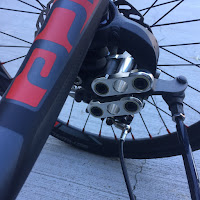 A suspended trike and it's added weight does not move on it's own. To varying degrees depending on the trike model a suspension system absorbs some of the riders energy output. Suspended trikes are heavier. Some of the heavier suspended trikes can weight up to 20% more then their comparable counterparts. The trike rider is the engine. You're simply going to have to burn more calories per mile for that engine to move the trike.

Suspended trikes definitely serve a purpose and there are a number of reasons to own one. However if you're riding paved roads and you want to maximize your energy output then a suspended trike is the wrong choice.

A suspended trike robs power from the engine, your body. I tried it on a minimally suspended ICE Sprint 26fs for nearly a year and based on the log I keep I figure it takes 10 to 15 percent more energy to get from point A to point B. Is it worth it? Not for me. And it's not always about speed. It's more about making efficient use of the energy I manage to coax out of my old muscles. I've come to the conclusion that paved roads are generally not in bad enough condition to warrant putting out the extra energy required by a suspended trike. I've found seating position, tires and mesh seats are the way to go to accommodate for road conditions. Even when riding chip seal for seemingly endless miles.

I would only consider a suspended trike if it included E-assit. But I''m not ready to add it to my stable. For now I want to ride under my own power for as long and as far as my 64 year old legs will take me. I've learned that a suspended trike is not a part of that equation.