While I'm out on the road (3-4 times a week) the number one potential problem that my mental radar is always looking out for is the "right hook". The right hook is the most common situation I come across. The right hook is when a driver wants to and often does make a right turn directly in your path. For me it seems to happen most frequently when a driver wants to turn into a driveway. It happens less at intersections. At intersections with designated turn lanes I take up the turn lane or move over into the traffic lane (if safe to do so). At intersections without right turn lanes I make it clear, in a friendly sort of way, that I'm going straight by either taking the traffic lane or point that I'm going straight. Every intersection presents it's own little challenge and each rider must approach it in a way that's comfortable for them.
It's pretty easy to spot the crazy or clueless drivers who are ready to pass you and proceed to turn in front of you. For the laid back rider it's easy to continually scan what's going on around you and act in a manner to save your hide by anticipating what a car is going to do. There's a lot of clues you start picking up on as you put on the miles.
A breed all their own the clueless drivers are easy to recognize by the uncertainty in their decision making capacity. These are the ones that tentatively approach from behind, pass you and then stop in mid turn knowing that they screwed up. Then it takes a bit of effort on my part to make it clear I don't want to go in front of them as I try to wave them on. The crazies are another story, they rev their engines in a attempt to beat you to where they want to turn. I let them win. 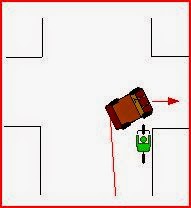 Beware the right hook and other assorted predators. Try not to be the one that rides in the gutter thinking that riding next to the curb is the safest place to be. Claim your right to be on the road and make your intentions clear but have a bailout option and be willing to swallow your pride rather then take on a 3000 pound SUV...you will lose.

Email ThisBlogThis!Share to TwitterShare to FacebookShare to Pinterest
Labels: Safety